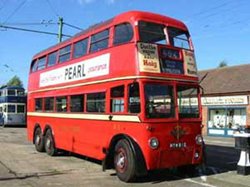 This site uses cookies for internal use only and are not used for any other reason nor are they shared anywhere. This message will no longer display after you have clicked 'Accept'.

Between February 1948 and January 1949 London Transport took delivery of 77 Q1 class trolleybuses (fleet numbers 1765 – 1841), which included 1812. These were purchased to replace the 60 ‘Didlers’ which had inauguarated trolleybus operation in London in 1931 and 17 trolleybuses lost to enemy action during World War 2.

All 77 vehicles were allocated to Fulwell depot and 1812 entered service in September 1948, operating on routes 601-605. A second batch of 50 Q1s (1842-1891) entered service in 1952 replacing some non-standard and several early vehicles that were beyond economic repair.

In 1954 London Transport took the decision to abandon its trolleybus system in stages over a number of years starting in the late 1950s and it was originally planned that the Q1s would remain in operation until 1970. However in 1959 the plans were re-assessed: it was now considered that retaining a small trolleybus network in west London would not be economic so all but two of the Q1 class were offered for sale at £1,000 each. As there were no British takers talks were held in 1960 with Spanish trolleybus operators who formed a consortium to buy all 125 vehicles for £500 each. Of the ones not included in the sale, 1768 was placed in the London Transport Museum collection and 1841, the last of the 1948 batch, was scrapped because of its non-standard electrical equipment.

On 24 February 1961 1812 was towed to St. Katherine Docks and hoisted on board a ship, an event recorded in a British Pathe newsreel; when new, 1812 with two others had also featured in a bodybuilders' official photograph. She was shipped to Spain where she eventually was transformed to become No. 8 in the Santander -Astillero fleet, rebuilt with a reversed platform and staircase. Other Q1 conversions elsewhere were more drastic: many were rebuilt to dual door layout with centre stairs, some as 20-seat single deckers, and two even as dual door lefthand drive motorbuses!

Following the demise of the Santander system in 1977 the British Trolleybus Society bought 1812 and she was returned to England on 19 June 1977. Much restoration work needed to be carried out, including conversion back from right-hand running, and this was eventually started in 1999. This major project was finally completed in 2001, in time for her re-launch into service at the Spring Bank Holiday of that year. Subsequently excessive wear in the rear axles caused her use to be limited but new differentials were produced by David Brown of Huddersfield and fitted in time for her to return to service at the Sandtoft Gathering 2006.

1812 is currently in storage in the south of England and an appeal has been launched so further refurbishment work to be carried out.

The museum is operated entirely by volunteers and is open on selected days only. Click on the highlighted dates in the calendar or

for details of what is scheduled for any one open day. You can also view full details of our facilities and attractions.